Chuck Sullivan was appointed as the President of the AFFI in January of 2020 and then elected in June of 2020 by the delegates of the 43rd Biennial Convention. He had previously served as the Central District Legislative Representative since 2008. Chuck has served in various Executive Board offices within his own Champaign Local 1260, and was also the AFFI 2nd District Political Education Committee Coordinator from 2004 to 2008. Sullivan was hired by CFD in 1995 and is a Captain.

His most rewarding Local union event has been coordinating the annual retiree dinner and states: “Our history and our experience are our greatest assets. We can’t lose that.” He also enjoyed the difference he is able to make in people’s lives as a firefighter and that he is able to help brother firefighters as a union leader. Roate says the biggest challenge facing fire service labor is “to truly bond as union firefighters throughout the state, drawing on each others experience and numbers.”
You can contact Tom at: [email protected]

Luke Howieson currently serves as the AFFI Vice President, having been elected to that position in 2018.  Luke began his fire service career in 1995, and has served with the DeKalb Fire Department since 2001 where he is currently a Captain.

Luke is a proud member of DeKalb Fire Fighters Local 1236 in which he has served the local as a Shift Steward, Treasurer, and President.  He is also proud of his involvement with the AFFI Warrior Program and the AFFI Labor History Committee.  Luke has been a fire service instructor for multiple institutions across the State of Illinois. 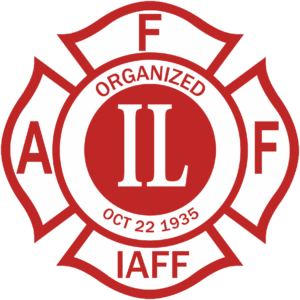 Steve was hired by the Alton Fire Department in May of 2000 and is currently a Captain.  He served as Treasurer of Local 1255 from 2005 – 2011.  Steve has been President of the Local since 2011.  District 3 Vice President Perry has also been a member of the AFFI Honor Guard since 2003 and is honored to currently serve as District 1 Commander since 2014.  He was elected District 3 Vice President at the 43 Biennial Convention in 2020.  Many Honor Guard members also serve on their Local Executive Boards in District 3.  Local issues are regularly a topic of conversation at Honor Guard training and he decided that he wanted to use his years of experience as a Local Executive Board member to help other locals as their District Vice President.

Matt has been a member of Bolingbrook Fire Department for the past 23 years, currently serving as a Lieutenant since 2007.  He was elected to Local 3005‘s executive board in 1997 as a shift steward and has held the positions of contract negotiator, vice president and since 2006, Local President.

Steve Shetsky was elected as Northern District Legislative Representative in June of 2020 and has served on the Political Education Committee since 2012. In January of 2013, he was hired as a Staff Representative and focused primarily on the political and legislative components of the AFFI’s efforts. He earned his Master’s in Public Policy and Public Administration from American University in Washington, DC. He was hired by Lincolnshire-Riverwoods Fire Protection District in 2006 and currently holds the rank of Lieutenant. He has served as the Local 4224 Secretary, Treasurer, Vice President and multiple terms as President. He also works for the International Association of Fire Fighters as a State Political Academy instructor and travels the country teaching campaigns and politics to IAFF members in other states. Steve currently serves as the AFFI PAC Secretary

“Our profession is political in nature and we are forced to participate in that arena if we want to preserve our rights and advance the labor movement. There is no substitute for firefighters representing ourselves at the State Capitol. I take great pride and consider it an honor to be able to work with the Legislative Committee on behalf of our 15,000+ members in Illinois.”

Jeff began work with the AFFI in 2016 as a Staff Representative and focused primarily on Collective Bargaining and Database Development.  Jeff currently serves as the AFFI PAC Treasurer.

“It’s an honor to serve the 33 Locals and 1000+ AFFI members of the Central District and it is a privilege to lead a highly motivated group of top performing Political Education Committee members to advance AFFI initiatives in Springfield, throughout the region, and across the State of Illinois.”

Richard Martin was elected as Southern District Legislative Representative in May 2005 and has served on the Political Education Committee since 1999.  He was hired at the Murphysboro Fire Department in 1984. He helped organize Murphysboro Local 3042 and was elected Treasurer of the Local in 1987 and President in 1996. He still holds that position. Martin states one of his proudest moments was when he negotiated a contract for 24 / 72 shifts which also added two more members to his department. Martin has worked numerous campaigns to elect state and local officials that understand and are supportive of labor issues. Richard currently serves as the AFFI PAC Chairman.

He maintains an ongoing relationship with elected officials to get firefighter issues addressed. “Maintaining our collective bargaining rights and post employment health insurance are two of the biggest issues firefighter’s face,” Martin states. One of the most memorable moments in his tenure as a union firefighter was to represent Southern Illinois at the Democratic National Convention in July 2004 with other union and labor representatives.